Stephen King is the Real Deal

When most people go to see celebrities in person, they feel like they are meeting people of very high attitude and self-image. They’re afraid to ask questions, they’re afraid to look at them and they’re afraid to even approach them. Such fears are often irrational, and on most occasions it turns out to be completely untrue.

When I went to see an interview with author Stephen King at the Bushnell Center for the Performing Arts, I expected a lot of what he would refer to as “bullshit.” I expected a grumpy, uptight old man who was full of himself. What I got was a guy who seemed fun to be around. 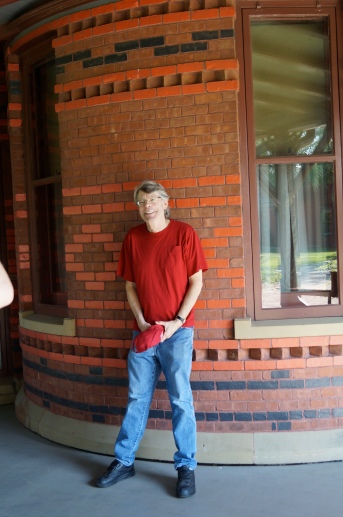 You would think that a man who has trouble remembering his childhood, who has written some of the darkest works in modern American literature, and who also got hit by a van in the winter of 1999 would be a little bit sour at this point, but the first thing that struck me about the interview was the fact that while the questioner, Colin McEnroe, walked on stage in dress pants and a smoking jacket, while Stephen himself walked on stage wearing a polo shirt and a pair of blue jeans. No uptight celebrity that I know of wears jeans for an interview.

Incredibly calm and casual throughout the interview, Stephen never bothered censoring his language, as anyone in the audience could tell you. He seemed like he was just having an ordinary conversation, and made the whole ordeal seem more like a stand-up comedy than a proper interview.

Stephen talked a lot about his works, his music – I was surprised that he was a guitarist – and also a couple of the films based on his work. He noted that some of his favorite adaptations were Stand By Me, The Shawshank Redemption, and The Green Mile, which are all really good movies with wonderful actors.

At this point, I realized that Stephen was just a regular guy. Sure, he is famous and successful, but in all honesty, I don’t think that mattered to him.

I haven’t read a lot of Stephen’s work, but based on what he said and how he acted, I’d like to check out a couple of his stories sometime. After all, if he understands how people work, and how to keep a reader engaged and interested, he must have some idea of how to write a good story.

I think I’ll start with something less horror-oriented, though, because I don’t want Stephen’s work to be the source of my nightmares for a week and a half.

You may have noticed I keep referring to King by his first name, Stephen. The reason for this is because I think King is an extremely royal name for a man who makes a living writing about killer clowns and children who, for some reason, all have ESP.

You could argue that Stephen is a king: the king of modern horror. To that, however, I’d just half-close my eyes and applaud slowly for your half-baked joke. Stephen may or may not be a king, but if he is, he’s the humblest king in history.