Ashaya Nelson: Ready For Senior Year, In Her Own Way 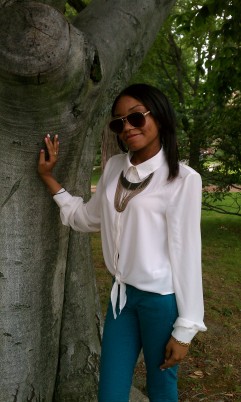 Seventeen-year-old Ashaya Nelson dreams of writing about fashion in her favorite city, Madrid, and possibly having an affair on the side with President Barack Obama.

But first, she must make it through her final year of high school at the Metropolitan Learning Center in her hometown, Bloomfield, Conn.

Nelson has been attending the school since sixth grade, and she has mixed emotions about her final year.

What scares her the most? This coming school year, Nelson will complete the dreaded senior project, which includes a presentation in front of a panel of teachers, as well as a service-learning component.

“The seniors tell you that they ask a lot of questions, and I don’t think I’ll be prepared,” she said. “I have a bad memory.”

Nelson has a good idea of what she wants her senior project to be about, though. This past March marked the anniversary of her older brother’s death.  Javon Turner was only 18 years old when he died in a car crash in March 2012.

Her brother, Nelson said, was drinking and speeding when he drove into the back of a truck.

She’s nervous about presenting her senior project, but she is excited to graduate and move on.

Besides being with – and growing tired of – the same classmates for seven years, Nelson is frustrated with the lack of typical high school activities and traditions.

Part of Nelson’s dislike for her school comes from her passion for fashion. She loves clothes and accessories, especially when they’re from Forever 21.

At her school, Nelson isn’t allowed to wear her shirts, blazers, or nude pumps from Forever 21; she is required to wear a uniform.

But that doesn’t mean she dresses like everyone else.

“I guess I get away with it because I’m not loud about it.”

As much as she loves fashion, she worries that she won’t be able to make a career out of it.

“I feel like [fashion] won’t be useful,” she said. “I feel like it won’t get me anywhere.”

No matter what career Nelson pursues, she will always incorporate fashion into her daily life.

She loves wearing the colors white and blue, and she’s taken inspiration from Mark Twain, whom she has been studying about this summer. “I think I want to be like Mark Twain, and have a white ‘don’t-give-a-damn’ suit.”

If Nelson does become a fashion writer, she’d love to live in Madrid, where she traveled two years ago with her school. She fell in love with the vibe, the people, the architecture, and the sculptures.

It’s easy to picture her living there one day, writing for Elle, and meeting some of her favorite celebrities, including Obama, whom she has a huge crush on.

But for now, she just needs to make it through senior year.