Soccer is Just One of Ambriel Johnson’s High School Goals 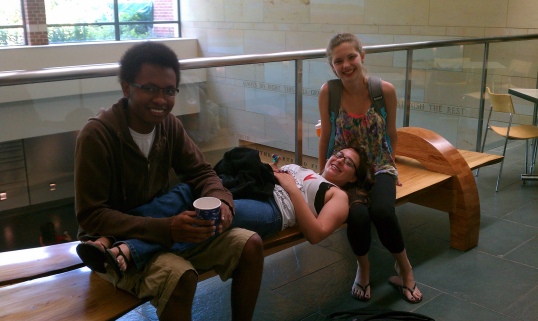 Ambriel Johnson, right, connected with other Writing Apprentices at Twain Studios. Here she is taking a break with friends Rae Martin, left, and Meaghan Szilagyi, center.

She plans to pursue many of her hobbies at the school, like writing and clarinet playing, but she is especially looking forward to joining their soccer team.

Johnson has played soccer since she was six.

“Probably my dad got me into it,” she said. “My dad was my first coach. He coached me till I was about nine.”

Soccer clearly provides a good bond between father and daughter. They watch soccer games together, and he goes to as many of his daughter’s games as he can.

“He still plays, even though he’s like 40,” Johnson said with a smile.

At first she played only recreational games, but began playing varsity once she felt she was ready. She’s already won many trophies in tournaments with her traveling team.

Along with personal experience, she often watches soccer games on the television.

“I always watch the World Cup and the Women’s World Cup.”

Though Johnson has no particular team she roots for, her favorite athletes are Mia Hamm and Lionel Messi.

Johnson’s passion for soccer is clear when you talk to her. She “gets pumped” before every game by wearing an orange prewrap as a headband.

On an average week she will have two practices and two games. During tournaments, it’s five to six games. It is unclear how rigorous her high school’s soccer team is, but she plans to attend the tryouts.

If she feels her skill level has advanced far enough, she will join the team of her future college, but that time is far away.

As school gets underway, the athletics department will have a skilled young athlete to bring life to the soccer field.

Johnson’s love of the sport inspires those close to her to find a similar passion for a hobby of their own.