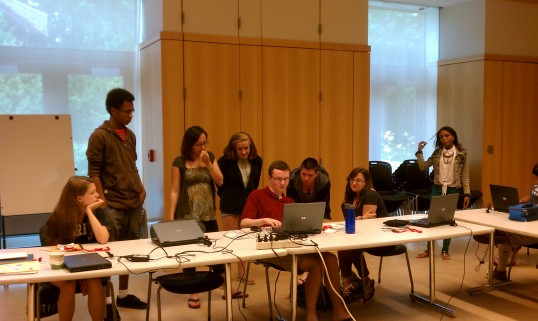 The Writing Apprentices of Twain Studios worked together and on their own. For a story about the governor of Bermuda visiting the Mark Twain House & Museum, they collaborated. Grant Henry, seated in the center, typed as his colleagues chimed in with additions and changes. From left, Ambriel Johnson, Rae Martin, June Tran, Molly Miller, Nick Sherman, Meaghan Szilagyi and Ashaya Nelson.

Hoping to spread his passion for Hayao Miyazaki, the visionary director of well-known animations such as Spirited Away and Castle in the Sky, Grant Henry spends his evenings online, scouring Facebook for a new person to chat up about anime.

This is one of his favorite pastimes, aside from working on his latest project, Breaking Bad the Musical … soon to be on Broadway. 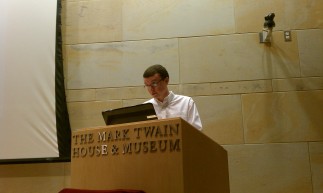 Grant Henry reads from his work at the Twain Studios Showcase.

“I’ll show people things,” Henry said, when asked how he shares his love for animation. “If they’re looking for a good movie, I’ll send a clip to someone.”

Henry’s strong passion for animation comes from someone very dear to his heart, his grandfather, Paul Kelley.

His grandfather used to give him copies of Herge’s Tintin.

“We would get together and discuss the art,” Henry said, his fondness for his grandfather readily apparent.

“It’s one of my recent favorites,” said Henry. “It’s about this teenage biker gang. One of the boys gets mixed up in government experiments and gains extraordinary powers.”

He speaks excitedly about his favorite film, as if it were better than the comic it is based on.

“I’m also a big fan of comics. They go hand-in-hand with animation,” he said, following up his statement on the film Akira.

His enjoyment of animation is obvious, as is the influence it’s had on his life.

When asked about his all-time favorite comic, Henry talked enthusiastically about a French one called The Rabbi’s Cat.

“This is a really fun one,” he said with a smile. “It’s about a jealous cat that eats a talking parrot so that he can communicate with his owner, The Rabbi. They have discussions about religion.”

Henry, 18, is a philosophical person, always looking for a metaphor.

This recent Watkinson graduate,  now a freshman at Clark University, said his grandfather helped shape him into the anime lover he is today.

One of the many reasons why Henry tries to spread his appreciation for animation online is because not many people do.

But what about that Breaking Bad musical?

Begun recently, the project is a rap musical he has entitled Breaking Bad the Musical.

“It started as a conceptual joke, and then got serious,” said Henry, who said he loves the television show because it is so suspenseful.

“I thought it would be very fun to write a musical on it. Embarrassingly enough I found out I couldn’t write music, so I decided to make it a rap musical.”

Henry is also currently working on his own graphic novel.

Don’t forget to keep a lookout for this aspiring artist’s many projects, coming to theaters and bookstores near you soon.

Oh, and be sure to check out a few films by the director Miyazaki, too.