Archive for the tag “Colin McEnroe”

Apprentices Get Behind the Mic

Sit down at the table, adjust the microphone, breathe in and out, and read your script.

The first time we went to WNPR we just were on the set of a radio show. Seeing the last-minute preparations was interesting. Everyone came into the studio about three minutes before the show went on the air.

The host, Colin McEnroe, and three others had fun while working. They spoke about binge watching that has become popular.

But on our second visit to the station, we were able to see what it’s like to be behind the microphone. The other apprentices and I each recorded a piece of our own work inside a studio.

Opening the heavy, soundproof door, I was anxious and a little nervous when it was my turn to record my work about the strong librarian, Josh Hanagarne.

It’s not as easy as it may look. We helped to encourage each other.

Hearing my voice was weird. A lot of us didn’t like hearing our voices.

It took me multiple times to get it right. I had to make sure I wasn’t talking fast, that my voice was projected and I was speaking with expression.

After Senior Producer Catie Talarski edited our recording, we helped each other choose what music would sound good with it. We selected from a variety of music on the studio computer.

I decided that I wanted a song that was a little upbeat.

Recording was one of my favorite things we did this summer. It was a new and good experience going to WNPR. 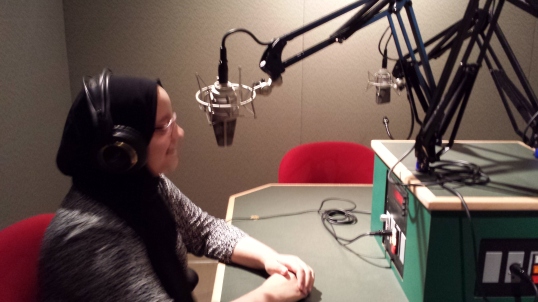 The thoroughly publicized Stephen King – Colin McEnroe interview at the Bushnell Center for the Performing Arts on Thursday succeeded in packing the house and raising lots of money for the Mark Twain House & Museum.

Everyone shuffled to their seats; some dressed to the nines, others, not quite.

The place itself was well designed, as many old buildings tend to be. Priceless architecture, beautiful ceilings, 1930s styled seating, and an atmosphere completed by a prestigious place across the plaza from the state Capitol.

McEnroe finally came on stage after Gregory Boyko, chairman of the Twain House board of trustees, ended his placid prologue full of classic Twain quotes such as, “My works are like water. The works of the great masters are like wine. But everyone drinks water.”

Following McEnroe came the big man himself, Stephen King. They both sat and began to talk. And talk. And talk. His personality, a bit like that of a rock star, and the mythos of King and his works kept the crowd enthralled.

The most intriguing thing wasn’t so much what King said – though he was often funny – was just how fretfully normal he seemed. Put his fame aside and you get a roughly average Joe.

Unfortunately, this seems to be the reality of most “celebrities,” and discovering this hard truth nearly detracted from the experience. Nearly, but not quite, as a story still came from the evening and from a later, personal encounter with him.

“Personal encounter” is actually a major over-exageration. As King exited his Friday morning tour of the Twain House, my workshop group and I stood in his way, fawning over his performance from the night. If we hadn’t, he would have been able to circumvent us entirely.

Truth be told, I was a bit anxious about pestering the man for an autograph – keep in mind that was my main goal – but he seemed to find the group’s attention cute enough to come over, shake our hands, say hi and take a few pictures. He must be very used to these things by now, but he was very courteous about all of it.

I’d just opened my mouth to ask for a signature when King said, “I gotta jet.”

It was a simple sentence to represent the underwhelming nature of it all. Of course the kids were thrilled, more for his celebrity than anything else in that exchange.

As much as I would hope to be successful in my craft, the type of instant recognition King gets is detrimental to the nature of most writers. We are to act as observers and highlighters of the world around us. In any case, I wish King the best of luck in the future. He’s reached a cultural level I probably never will.

When King paused on the way to his car to say hello, the writing apprentices of Neighborhood Studio’s “Write to the Point!” program each took turns feeling the worn fingers that brought the world over 50 thrilling novels.

This certainly wasn’t the first time King has shaken the hands of fans in Hartford. Just last night he joined NPR radio host Colin McEnroe for a dialogue at the Bushnell Theater.

King discussed his life and opinions to a packed house that laughed and cheered at every remark and reference the author made. The show, as entertaining as it was, had a very human goal: all the profits went straight to the Mark Twain House & Museum.

King was set to arrive at the Twain House for a reception Thursday afternoon. An incredible excitement filled the air, and questions flew in the minds as everyone anticipated his arrival.

Josh Hanagarne, a bodybuilding librarian visiting the museum, had the honor of having lunch with King. Everyone was jealous. All the adrenaline pumping through the staff’s thinking caps could only be rivaled by the enormous standing ovations the crowd of thousands gave King at the Bushnell later that night.

A photograph produced itself on the Twain House facebook page mid-day; a picture of the King himself signing books in one of the museum offices! He’s here!

All the young journalists diligently working on independent projects could do was wait for their own shining moment with the author. It did not come until the day after his stellar performance, though.

King was on a tight schedule before he had to return to Maine, but he made sure to first tour the home where Mark Twain lived. When he emerged from the historic home, the writing apprentices greeted him.

Dressed casually in a red sweater, King gave the grinning young journalists a moment to remember before he said he had to “jet” and return to his comfortable home in Maine to continue spooking audiences everywhere.