Archive for the tag “Greater Hartford” 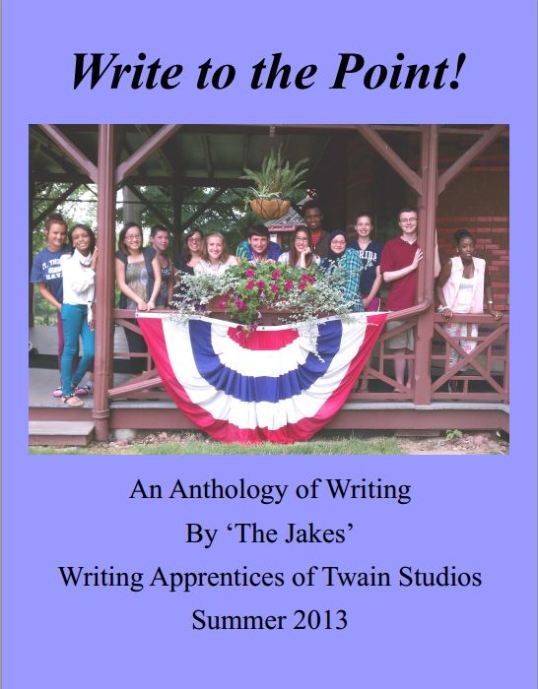 This is the cover of the 48-page anthology of work by the Writing Apprentices of Twain Studios. You can see the whole thing by following the link below.

For six weeks in July and August, 2013, a dozen teenagers from diverse backgrounds, different schools and towns, came together as a group at The Mark Twain House & Museum.

This group, the newest of the Neighborhood Studios of the Greater Hartford Arts Council, originated with a great conversation between the arts council and Julia Pistell, who is part of the Mark Twain House communications team.

Led by Master Teaching Artist Jackie Majerus, the teens practiced reporting, interviewing and writing creative non-fiction. They learned about Mark Twain, his Nook Farm neighborhood and neighbors past and present and about each other. Lasting friendships formed. They explored Nook Farm and the state Capitol and learned from an array of guest speakers.

The program was called Write to the Point! and the students, who were writing apprentices, called themselves The Jakes, their shorthand for “Journalism Kids.”

The teens, who ranged from age 14 to 18, worked individually and cooperatively on all sorts of non-fiction writing. They wrote a lot. Most of it is on this blog. Much of their best work was printed in a 48-page anthology – their crowning achievement distributed at their showcase last month, where the youth read their work aloud to an audience of family, friends and others interested in the arts.

Besides the written work, and some artwork of the youth in the studio, the anthology also includes many photographs of these wonderful young people throughout their summer adventure. It is impossible to fully capture a lively group of creative young people on a blog or on a printed page, but this blog, and the anthology, should offer a glimpse into an amazing summer experience.

Thank you for taking time to explore this blog and the anthology.  Comments are welcome, too!

To see the anthology in PDF form, follow this link: