Archive for the tag “Rae Martin”

This is the cover of the 48-page anthology of work by the Writing Apprentices of Twain Studios. You can see the whole thing by following the link below.

For six weeks in July and August, 2013, a dozen teenagers from diverse backgrounds, different schools and towns, came together as a group at The Mark Twain House & Museum.

This group, the newest of the Neighborhood Studios of the Greater Hartford Arts Council, originated with a great conversation between the arts council and Julia Pistell, who is part of the Mark Twain House communications team.

Led by Master Teaching Artist Jackie Majerus, the teens practiced reporting, interviewing and writing creative non-fiction. They learned about Mark Twain, his Nook Farm neighborhood and neighbors past and present and about each other. Lasting friendships formed. They explored Nook Farm and the state Capitol and learned from an array of guest speakers.

The program was called Write to the Point! and the students, who were writing apprentices, called themselves The Jakes, their shorthand for “Journalism Kids.”

The teens, who ranged from age 14 to 18, worked individually and cooperatively on all sorts of non-fiction writing. They wrote a lot. Most of it is on this blog. Much of their best work was printed in a 48-page anthology – their crowning achievement distributed at their showcase last month, where the youth read their work aloud to an audience of family, friends and others interested in the arts.

Besides the written work, and some artwork of the youth in the studio, the anthology also includes many photographs of these wonderful young people throughout their summer adventure. It is impossible to fully capture a lively group of creative young people on a blog or on a printed page, but this blog, and the anthology, should offer a glimpse into an amazing summer experience.

Thank you for taking time to explore this blog and the anthology.  Comments are welcome, too!

To see the anthology in PDF form, follow this link:

Mark Twain: An Estrangement with Religion

It’s no secret that throughout Western history – before the rationalist and secular movements of the past few centuries – organized religion has held massive sway over humankind.

By Rae MartinMark Twain, for his time, was quite progressive in some of his views on religion – and obliquely depressing in others.

It’s surprising, on both accounts, considering he was born in a conservative small town, which typically leads to a strong sense of faith.

Being born in Florida, Missouri today would be hard enough, but during the 19th century? Unfathomable. It’s simply stunning that Mark Twain grew to criticize religion, an establishment still venerated by some today.

“If you think something is important, and it’s going the wrong way, you get really passionate,” said Steve Courtney, publicist and publications editor of the Mark Twain House & Museum,

Passionate is a meek word for some of Twain’s last writings on religion and life.

If his appreciation of the importance of religion comes from his social environment growing up, then his amiability in terms of differing beliefs comes from his mother, Jane Clemens.

She was not a puritan in any sense, but a sampler of religion who brought her son along for a taste of faith at different houses of worship.

And from church, to cathedral, to synagogue; she sampled religious tastes. And if you can’t already tell, that kind of thing simply didn’t happen.

With that history in mind, it now seems unlikely that Twain would have grown up to be anything other than open-minded when it came religion and slavery, the two biggest social conventions of the day.

It’s clear to me that Twain did believe in some sort of god, and his rants against that god is more to disparage the church of the day and as an expression of feelings stirred by the deaths of three of his four children.

The untimely deaths of all but one of his children, coupled with increasing American imperialism, the hypocrisy of Gilded Age culture and immense worldwide fame built up a mocking critique of bullshit dogma from religious institutes.

If Twain was alive and writing today, he would probably be agnostic.

Mark Twain “gravitated between two views,” said Courtney, either believing that God didn’t exist, or thinking God is a sadist.

He’d have possibly railed against the contemporary church even more than he did against the church of his time, due to a surge in anti-religious and anti-church thought that has swept through the Western world.

If he had been born in contemporary times, he would be a Christopher Hitchens-type figure, relentlessly questioning and challenging organized religion.

Twain was not only a magnificent writer of prose but a well-versed public speaker on all issues of culture and society. Not only jabbing at religion, but also foreign policy, class warfare, social and economic dispositions.

His provocative inquiries would likely ignite hatred and threats of personal violence as his distinct boldness in the oral and literary arts is marked by a refusal to back down in the face of cultural taboo.

Another parallel is the surprising friendship that the atheist Hitchens found with Pastor Douglas Wilson. Twain found close counsel in the Rev. Joseph Twichell of Asylum Hill Congregational Church in Hartford, where the Clemens family attended.

In today’s extremely polarized society, Twain’s caustic demeanor would certainly have been drawn out even more than in his day. He would have been right at home in contemporary pop culture, a place ripe for the pickings of a satirist of Twain’s caliber.

Writer Rae Martin, A Young Man of Many Words 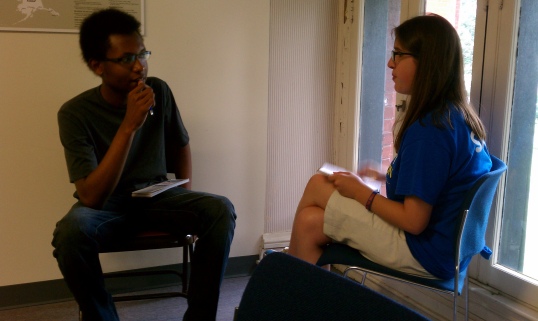 I was shocked from the start to learn his age. The description that crossed my mind as I sat down with him is “mature beyond his years.”

He is precocious, well-read, and a realist. In telling me about his school – the Metropolitan Learning Center, a magnet school in Bloomfield – he termed his classmates “not my kind of people.”

But then, it seems, it’s tough to find people who are.

Martin is a writer – a serious writer, banging out one short story and several poems a week. While his subjects have thus far been based in reality, his newfound fascination with George R. R. Martin’s fantasy series A Song of Ice and Fire has inspired him to write with a slightly fantastical slant.

He has never really been a fan of the obvious – the Harry Potter series – but he believes today’s consumers might find fantasy more attractive and “entertaining.”

His familial relationships contribute largely to his work. His parents are no longer together, and while his ties are closer to his maternal relatives than to his paternal, they have both played a pivotal role in his development.

They taught him common sense, he says. Through their lessons and his own convictions, Martin has come to believe that “while [people] have sympathy for fellow man, what they do … is self-serving.”

He is not religious, but quite philosophical: he often marvels at the way some people float through life without pondering the “deeper things.”

Then again, he acknowledges, in a world of squalor and injustice, some people can’t afford the room in their day to sit and “marinate on the world” for even a few minutes.

Who has spurred him to do some marinating of his own? What literary figures drive this aspiring novelist forward?

“I take a lot of inspiration from Charles Bukowski,” said Martin. In the style of Bukowski – whose 1982 novel Ham on Rye is one of Martin’s favorites – Martin endeavors in his own writing to “keep it real, keep it raw.”

Martin has a creative attitude toward his craft.

“If a poem is a feeling, then a short story should be a scene,” he said. “And a novel should be a whole movie.”

Whatever activities Martin pursues, he always returns to writing.

“I tried very hard to be good at [sports],” he admitted, but those odds always seemed to be against him. Besides, the school is only a decade old: many of its teams are fledglings, and there is no newspaper or literary magazine. I asked him if he has considered starting one.

“Maybe for senior project,” he said.

Martin doesn’t mind all this – he plans to build a life for himself just writing books. He hopes to get a jump start on this path in a couple of years by attending a small liberal arts school – out-of-state would be ideal – but he won’t be surprised if financial conditions keep him in Connecticut.

In any case, wherever he winds up, I am convinced of his imminent success.

The world might just have another Charles Bukowski on its hands in the very near future.