Americans are idiots. The land of America is home to the popular term “YOLO – you only live once” and the constant usage of hashtags and abbreviations.

We Americans are at the pinnacle of bad grammar and spelling. As demonstrated by the daily tweets spewed out by our regular Twitter addicts, the American language has taken a turn for the worse.

Going back more than a century to the time of literary giants Mark Twain and Harriet Beecher Stowe, we see a different type and view of the American language.

Twain, a celebrated American author, completely changed the way the rest of the world viewed the American language. 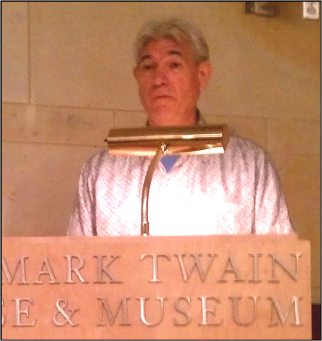 Patti Philippon, chief curator of The Mark Twain House & Museum, said what really elevated and characterized Twain’s and the American language was his use of “slangs and colloquialisms.”

Twain had the ability to put into words the way that people sounded, presenting the American language as something that is syntactically beautiful and admirable.

The act of crafting a piece of writing was not only practiced by Twain or by the esteemed classes – craftsmanship can be seen even in letters written by everyday civilians or even soldiers.

“People took time with their language and speech,” said Steve Courtney, publications editor at The Mark Twain House & Museum. Back then, he said, people would write 15 pages and take their time crafting it.

With the introduction of mass media technology during the 21st century, letters were replaced by a faster and more efficient medium of communication.

News surrounding a recent event can be received and understood by people in seconds.

Twitter, with its 140-character limit, emphasizes the need to be succinct and to the point.

Information utilized and passed by these sources, however, isn’t always informed and correct.

What is more striking than the degradation of the American language is the abuse of information by the media.

Twain praised the American press in a letter to British poet and cultural critic Matthew Arnold penned in the late 1880s, writing, “Its frank and cheerful irreverence is by all odds the most valuable quality it possesses.”

But there is a fine line between worthy and unworthy news.

As described by Donald Bliss in his book Mark Twain’s Tale of Today: Haley’s Comet Returns — Celebrated Author Critiques American Politics,  “like the newspaper of Twain’s time … there are lots of opinions and little fact-investigations. The more negative and sensational the opinion, the higher the ratings and advertising revenues.”

For serious journalists such as Christine Stuart, the editor of CTNewsJunkie, “being credible is more important than being timely.”

The language itself does not merely have to confine to a specific style or structure, but must exude the truth to its readers.

All writing, especially in journalism, will eventually shape the public opinion.

Writing something with a “purpose [is what] makes it all worthwhile,” said Joseph Nunes, a former editor at The Hartford Courant who is writing a book about the history of the newspaper.

Language would have no purpose as a method of communication if its receiver does not learn anything from it.

Learning is useless, Mark Twain wrote in his 1900 essay, “English as She Is Taught,” if the students’ memories “had been stocked but not their understanding.”